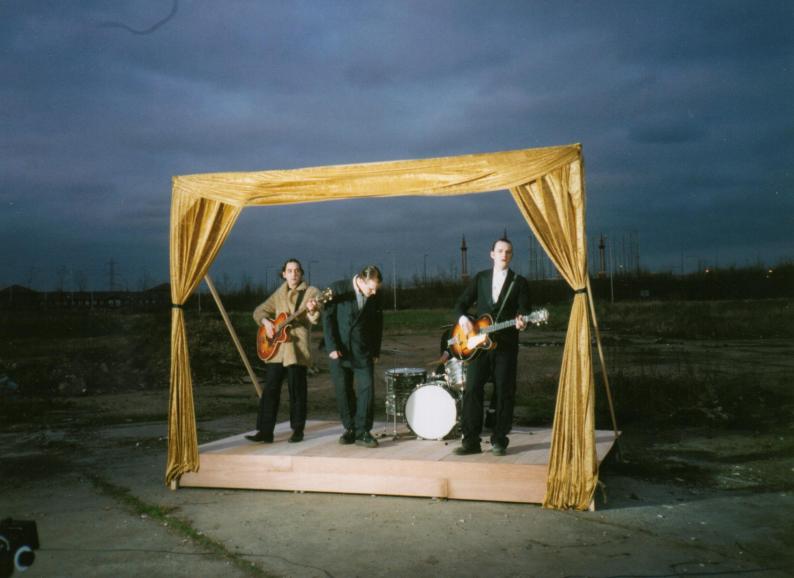 (above) Sticks and Stones video shoot

23 Feb 1994
Meet Lindy Hayman again, in Fred’s, Soho. She’s up for doing the video for ‘Sticks and stones’. Budget concerns move the setting from remote hills in Wales, Scotland or Yorkshire to wasteland between road junctions in South London. She wants to book more extras, models and dancers.

28 Feb
A promotional gig is planned up Tower Bridge.
Polygram have asked us if we’d provide music for a new Beano video.

4 Mar
Video shoot near London City Airport. Linda’s recruited ten extras – Yugoslavian Mica, as a lost bunny girl, Helen, a flamenco and ballet dancer, J.J, a wardrobe carrier and escape artist, a plate balancer, Donald, a drag act, Pinky the typist and tap dancer and two men who fight across a table. The video draws heavily from the work of German choreographer Pina Bausch and Peter Greenaway’s ‘Drowning by numbers’. Not sure it’s what MTV are looking for, but hey!
Carl confesses to a bald, pregnant woman and is later tied to a maypole. We mime on a rickety stage in strong winds and as the the sun sets. Our hair is slicked down again and we’re thick with expressionist make-up. (Watch the video, below.) 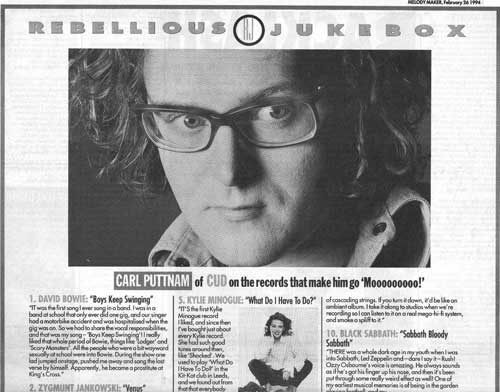 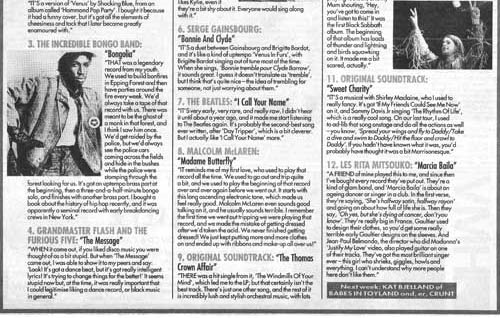 5 Mar
Carl’s latest style brainwave is that we all wear the antithesis of our glam flirtation for the Tower Bridge ‘Showbiz’ launch – denim. We’ll be more dressed up off stage!

14 Mar
Carl and Mike record an acoustic session for Radio 5’s ‘Fabulous’ and deal with a morning of phone interviews. Mike’s in a positive mood having got on well with Carl all day. Jim and I meet up with them in the Metropole Hotel later. Jim is talking about moving down to Brighton. Now Carl and I start talking about moving to London.

15 Mar
Tonight we’re the first rock band to play the corridors that link the two towers of Tower Bridge. And we’re in denim. It doesn’t really make us look like a unit. Mike purchases a formal cut of jacket. He still looks like a bouncer. I buy something pale rayon. We shared turned up new dark denim trousers. Don’t recall wearing them again after tonight.
The venue is totally unsuited to gigs. We have to wait for tours to end for us to get our gear up in shifts by the lift. The long corridor means the sound bouncing off the walls is awful too.
As the soundcheck takes longer we have to keep the media guests waiting an hour in the cold and silent second walkway. An East-End comic introduces us and we play a six-song set. We’re nervous, cramped and the first couple of songs are played poorly. The non-fan crowd are quiet in their appreciation. After the late start we’re unsure if the night proves a beneficial PR exercise. We meet a few business people, then escape to mingle with friends by the bridge exhibits and finish off the bottles of donated Stella.
Back to the Metropole to celebrate Dez’s birthday. The hotel demands a £25 deposit for each room then kicks us out of the lounge area for drinking our smuggled Stella.

19 Mar
Manchester to see ‘The Smell of Reeves and Mortimer’ live with Jim. Say hi to Mark and Lard and see the Coogan brothers in the Britannia Hotel bar afterwards.

23 Mar
Steve and I rehearse new songs while Mike and Carl are out doing their acoustic thing.

24 Mar
Ballad single scrapes into a midweek chart position of 61. Appalling. A&M bods blame each other but we are getting a third single off ‘Showbiz’. The ink is dry on our next year contract.

25 Mar
Meet Jim. The third single is likely to be ‘Slipaway’. There is the chance of a little Continental action. Record sleeve and T-shirt designs are looking good. Ticket sales for the next tour are slow.

29 Mar
Start tour rehearsals and work out two cover versions for the next single’s B-sides. We pick two tracks from the soundtrack to tour bus favourite, Russ Meyer’s Beyond the Valley of the Dolls’ – ‘Look on up at the bottom’ and ‘Find it’. they come together pretty quickly.

5 Apr
A long seven hour filming session for a mere four minutes on BBC North. Steve Shone and a BBC crew tail us in Burley Park and rehearsals at Old Chapel for an interview piece, result below.

6 Apr
Carl arrives over an hour late for rehearsals again, complaining about the extra amount of interviews he has to do, then he moans about Mike’s extra childminding money. This doesn’t go down with the guitarist who uses the free babysitting time to write songs.

8 Apr
Mike is convinced that Carl’s girlfriend, Ruth, is Yoko Ono, setting the songwriters against each other and try to split up the band by relocating to the capital. With Steve and I submitting few song ideas, a idea is mooted that the rhythm section share fewer publishing royalties (all currently ending up in the one pot of our joint account). I say I’ll drop working on the fan club mag and T-shirt designs to concentrate solely on songwriting if this is to be the case. Carl and I talk more about moving to London. Carl thinks it would be beneficial to the band as he’d be seen out more often with the music media.
Late news that Kurt Cobain has killed himself.

(above) The Showbiz sleeve referred to earlier albums.
The case of banknotes references When in Rome, the hands are for Asquarius.
Another case included Elvis belts.

11 Apr
‘Showbiz’ released.
The tour rehearsals are going well. We’ll be ready.
Jim comes over with first copies of ‘Showbiz’’ and asks for sleeve ideas for ‘Slipaway’. Carl suggests a spinning, luminous globe. 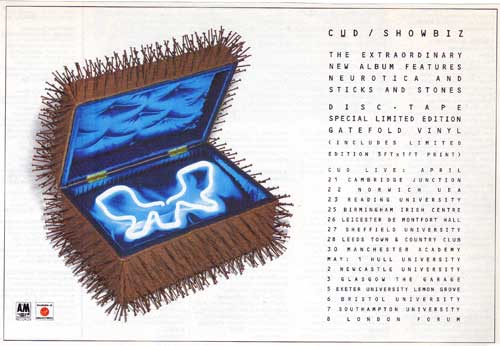 13 Apr
Last rehearsal. We pack the gear away solemnly as news comes in that two of the forthcoming dates have been downgraded due to poor sales. Weekly reviews of the album are positive though.
Tonight we meet Steve Harris at the Marriott. He will be producing ‘Look on up’ and ‘Find it’ tomorrow and some live recordings to be done on tour.

14 Apr
Recording B-sides. The bass parts don’t take long, with ‘Find it’ recorded live with Steve’s drums. ‘Look on up’ proves difficult to arrange as the original has a confusing percussive pattern, brass and female backing vocals.

15 Apr
Dave Lazenby comes into the studio to add alto sax to ‘Look on up’. The ambitious session ends at 1.30am. We’ve overrun by half a day. If A&M refuse to pay, we’ll stump up the measly extra £150 studio fees. We’re really happy with the performances. 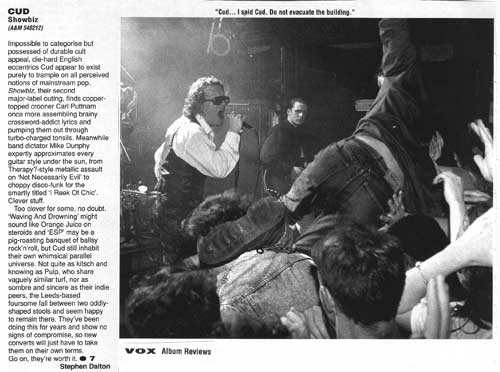 20 Apr
Pre-tour clothes shopping with Carl in London. We’ve spent £400 on Carl’s gear this tour including £90 on a second leather shirt today. I sew a red ‘W’ on my red and white T-shirt in honour of Woody of the Bay City Rollers (or the Wombles).
The road crew are resplendent on matching black boiler suits.
Support for the tour is to be My Life Story whose records I’ve been impressed with. They’re an eight-piece group, including cello and violins.