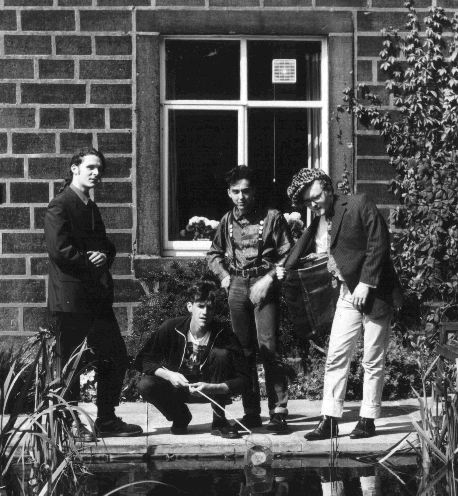 In a surreal mode for the unusable Slack Time photo session, outside Slack House

15 May 1988
Record second Peel session at Maida Vale with Dale Griffin (Treat me Bad/Punishment Reward Relationship/Living in the Past/Everybody Works so Hard).

It became a tradition to include an uncool cover version, so this time we chose a Jethro Tull classic and added a little Mission Impossible piano.
Everybody Works so Hard’ is amusing for its lyrical snapshots of the band and entourage. Every member gets a verse, but Mr Dedicoat, our bank manager, who, when presented with our first advance suggested we invest in steam railways. 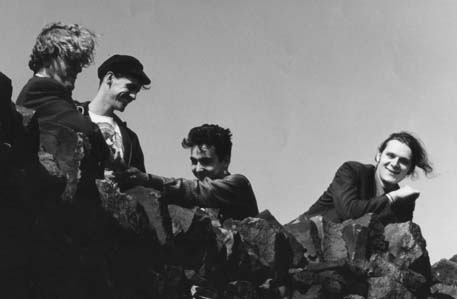 20 May
Record demo at Lion Studios, Leeds for next single, Slack Time/I’ve had it with Blondes/Make no Bones.

23 May
First Radio One broadcast of second Peel session.

First appearence of the long-lasting CUD logo, designed by Leeds Poly students, Crooks and Stevens. And Bob, of course.

17-19 June
Record Slack Time single with Paul Sampson at Woodlands Studio, Castleford. Paul Sampson was fresh of success producing the Primitives. This was the first time we’d recorded a single with a producer and Paul certainly add a pop gloss to the package, with tambourine, tabla and timpani backing to the rhythm section and Asian-flavoured guitar notes on the Blondes solo. Lack of funds and a hestitancy in the band meant, sadly, that we never got to work with Paul Sampson again. When in Rome Kill Me would certainly have ended up very different.

Both ‘Slack Time’ and ‘Blondes’ are littered with Church of Subgenius references including the date we were all meant to be lifted to Planet X. As I write, the date has been and gone. I’m still here, but no one has heard from CSG alumni Rev Martin Baker since 7am July 5, 1998.

8-9 July
Filming for BBC North ‘On a Personal Note’. This is a classic piece of CUD archive footage. The band painted a car in dayglo leopard skin designs. They posed amongst car wrecks daubed with the slogan ‘Dupes of the Conspiracy’ miming to new 8-track recordings of ‘Slack Time’ and ‘Blondes’. Girly duo, The Impossibles provided backing vocals on the latter. The show, which also featured other top Leeds acts, Age of Chance and The Wedding Present was hosted by John Peel. One day the video will surface I hope..

CUD ‘On a personal note’.
Minor tidbit: If you ever see this footage, you may spot the donkey from ‘Donkey with a Fez On’ on the bonnet of the car. William lifted it from the Beeb.

14 July
Live at Sir George Robey CND benefit (with Extreme Noise Terror and Mega City Four). Despite it being a benefit, for which CUD played for free, the band were plagued by punters outside asking for money to get in. Their meagre equipment had to be loaned to most of the other bands playing (except MC4 who turned up with posh amps towards the end.)

29 July
Live at St Helen’s Citadel (with Bob supporting). Though CUD played with Bob a few times, there was absolutely no link between this band and Mr J. R. Dobbs.

23 Sept
First BBC2 broadcast of ‘On a Personal Note’.

7 Oct
Newcastle Woosh Club (with Crane, who CUD would later invite on tour)

20 Oct
Salisbury Art Centre (with Phenobarbitones and the Razorcuts) 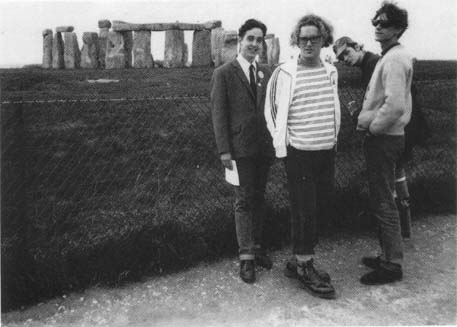 21 Oct
Old Sarum
CUD hire a generator on their day off to play an impromptu gig on the ancient site’s car park, in darkness. Flyers are handed out, vanloads of stripping hippies turn up and one minibus slides into a moat. CUD escape whilel a tractor tows it out and the police investigate.

Some pre-Xmas gigs:
2 Dec
York Uni, with the Highliners

20 Dec
York Arts Centre (with Groove Farm and Hill Bandits). CUD kidnapped the Social Secretary and took her to Leeds.

22 Dec
London Bull and Gate. This is Carl’s turn to skip a gig. Rather than cancel when Carl loses his voice, CUD play a mainly instrumental set and invite Elvis Belt amongst others to have a go on lead vocals.

The year ends with CUD having no record deal.