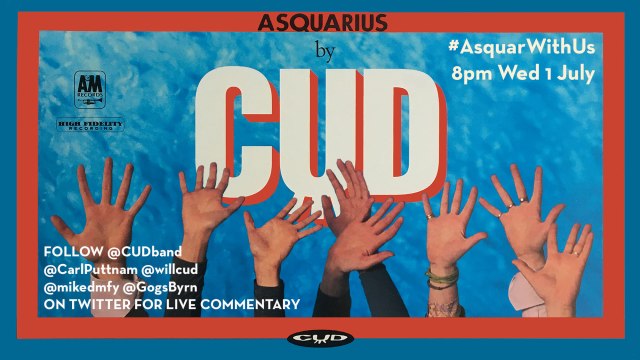 Because you demanded it, the CUD Band are back with another Listening Event on Wednesday 1 July, to celebrate the (almost) 22nd anniversary of their ‘smash hit’ A&M album release, featuring that little-known track Rich and Strange.

Join us on at 8pm for an Asquarius Listening Party!

Anyone who wants to join in will need to play CUD’s ‘Asquarius’ album (LP, CD, MP3, cassette, streaming) starting at exactly 8pm. As the album plays, track by track, Carl, Will, Mike and Gogs from the band will be online, commenting live and fielding your questions.

To join in, you need to be on Twitter, using and following the slightly awkward hashtag #AsquarWithUs. All comments using this hashtag will appear in one long stream. Be sure to follow the band @CUDband, Carl @CarlPuttnam, Will @willcud, Mike @mikedmfy and Gogs @GogsByrn too, and ask questions as we go.